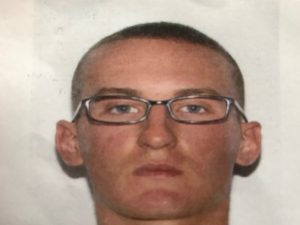 ROANOKE, Va. (AP) — The mother of a wanted Marine told investigators that she saw her son kill her boyfriend, according to a federal criminal complaint.

According to the complaint, Hanson also identified Brown’s getaway vehicle through pictures obtained from a gas station just before the shooting. The vehicle was later found near Clarendon County, South Carolina, about four hours southwest of Camp Lejeune, in North Carolina, where he had been stationed as a U.S. Marine until leaving his post last month.

Investigators think the Marine deserter was trying to contact his grandmother when a neighbor saw him in Roanoke on Thursday morning, Police Chief Tim Jones said at a news conference. Authorities believe Brown was driving a recreational vehicle, which was discovered by police nearby later that day. Law enforcement approached the RV, but Brown was not inside. Photos showed the RV suffered significant damage.

The search for Brown began after someone called 911 around 4 a.m. on Thursday to report that someone was tapping on the windows of a nearby house. Jones said Brown’s grandmother lives at that house and they believe he was trying to contact her and his mother.

When Brown left his post at Camp Lejeune, it “(constituted) the offense of Desertion … a federal offense punishable by imprisonment for greater than one year,” the complaint said.

A manhunt in Roanoke on Thursday forced school officials to cancel classes and led the city to issue a shelter-in-place order. Classes resumed on Friday and the city’s order was lifted, but residents were cautioned to be vigilant and to report any suspicious activity.