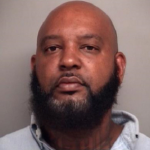 NEWS RELEASE: On June 11, 2019, deputies from the Henry County Sheriff’s were assisting deputies from the Stafford County Sheriff’s Office with apprehending Mitchell O’Shea Wilson. Wilson was wanted out of Stafford County Virginia on seven felony warrants. Mitchell Wilson has been known to be armed and dangerous. Multiple agencies were conducting a search for Wilson.

The pursuit traveled a total of 14 miles through William F. Stone Hwy, Irisburg Rd, Barker Rd, Axton Rd, and A.L. Philpott Hwy where the vehicle came to a stop at the intersection of A.L.Philpott Hwy and Old Liberty Drive.  Mitchell O’Shea Wilson was taken into custody without further incident. He was found to be armed with two handguns. There were no injuries or property damage during this pursuit.

Mr. Wilson was also served with the following outstanding warrants from the Stafford County Sheriff’s Office. All charges are felonies.

Mitchell O’Shea Wilson is currently held in the Henry County Jail without bond.