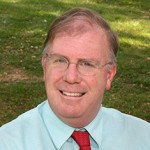 A local political scientist who had a front row seat for a while in the Reagan White House doesn’t give the late Soviet president Mikhail Gorbachev much credit for the demise of the Soviet Union, which took place on his watch. More from WFIR’s Gene Marrano: