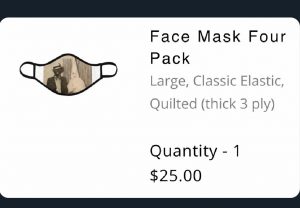 Liberty University President Jerry Falwell, Junior has repeatedly criticized Governor Ralph Northam’s actions that required the school to close all in-person instruction after Spring Break in March. Today, Falwell combined that with his disapproval of Northam’s recently-announced mandate to wear face masks in indoor public areas with a face mask he says is of his own design. On his Twitter account, Falwell shows a mask with Northam’s controversial medical school yearbook blackface photo on it. Falwell writes in his tweet: “I was adamantly opposed to the mandate from @GovernorVA requiring citizens to wear face masks until I decided to design my own. If I am ordered to wear a mask, I will reluctantly comply, but only if this picture of Governor Blackface himself is on it!”

A day after apologizing for the photo in February Northam denied being in the photo altogether. The controversial photo is of a man in blackface and another man in a Ku Klux Klan robe. After the Falwell tweet today, Northam Spokesperson Alena Yarmosky says “The Office of the Governor will not dignify that tweet with a response.”