(update 2/5 Roanoke County) The driver in Thursday’s crash in Roanoke City has been identified as Barry Wayne Mills Jr., 47, of Blue Ridge. In addition to charges related to the pursuit and crash, Mr. Mills was arrested on multiple counts of breaking and entering, larcenies and property damage, and additional charges are pending. Mr. Mills is the suspect in multiple business break-ins throughout Botetourt County, Roanoke County and Roanoke City, and his arrest was through the joint effort of the Virginia State Police, Botetourt County Sheriff’s Office, Roanoke City Police Department, and Roanoke County Police DepartmentDetectives.###

(PREVIOUSLY)  State Police say a suspect is in custody after a high-speed pursuit ended with his car becoming stuck in a drainage ditch. Officials say members of a drug trafficking task force spotted him and called in units in efforts to make an arrest, but the suspect tried to elude them at high speeds. Police say the suspect couldn’t handle the turn from Franklin Road onto Brandon Avenue, and the car got stuck in the drainage ditch. Officers found him hiding in a nearby dumpster and took him into custody. 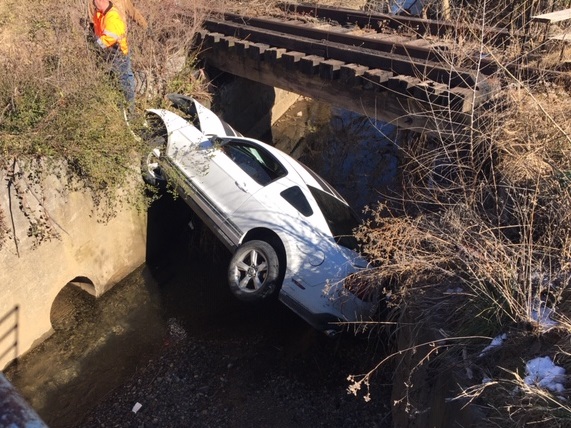 NEWS RELEASE: This morning at approximately 8:44 a.m. this morning officers from a multi-jurisdictional task force, including officers from The City of Roanoke Police, Roanoke County Police and the Virginia State Police spotted a white and black Mustang which was driven by a known wanted subject.  The subject is wanted for multiple arrest warrants in Roanoke County and Botetourt County.  The officers contacted a marked Virginia State Police unit to conduct a traffic stop on the vehicle.  When a marked state police vehicle activated its emergency equipment on Franklin Rd, a short pursuit followed, ending with the suspect vehicle crashing at the intersection of Franklin Road and Brandon Ave.

The driver fled the crash scene on foot and was located shortly after the crash, hiding in a dumpster in the parking lot of the Ramada Inn.
The subject was taken into custody without incident and transported to Roanoke Memorial Hospital for injuries received in the crash.
The Virginia State Police is conducting the investigation into the pursuit and crash.
Additional charges are pending.
No law enforcement were injured in the incident.

PREVIOUS: State Police say the police presence is the result of a pursuit and crash that ended on Franklin Road.

PREVIOUS: There’s a large police presence at George’s Flowers in Roanoke. At least five police officers have been spotted at the business which sits at the corner of Franklin Road and Brandon Avenue. There was no obvious damage to the building.

Check back for updates as they become available.