Jobless claims accelerate rapidly in Virginia due to virus 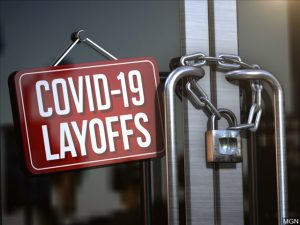 The jobless claims over the last two weeks now equal those filed over a full three months during the worst stretch of the Great Recession more than a decade ago.

In the month prior to impact from the coronavirus, jobless claims in Virginia averaged around 2,600.

The volume of claims is overwhelming the Virginia Employment Commission, which is charged with processing the claims. Callers to a toll-free number set up to process claims either can’t get through or wait for hours on hold. Applicants are urged to file their claims online, but that system is showing strains as well. A message on the employment commission’s website assures applicants that their claims are being processed even though the system is not providing confirmation of a submitted claim as it’s supposed to.

The commission says it’s also in the midst of revamping its online form to try to conform the more liberal filing rules approved by Congress as part of a $2 trillion stimulus package.

The huge spike in jobless claims largely mirrors the national trend, where roughly 10 million people have filed for unemployment in the last two weeks.

Jeannette Chapman, an economist at George Mason University, said Thursday that the regional economy around Washington, D.C., including northern Virginia, should expect to see essentially the same type of recession as the rest of the country.

In past economic cycles, the region’s heavy reliance on government jobs has insulated the region from the worst of a recession. In some cases, she said, like the federal budget battles and sequestration of 2013 and 2014, restrictions on federal spending caused a mild recession in the region while the rest of the country was growing.

In this case, though, the government jobs provide little insulation, she said, because while federal workers may still have their jobs, they are largely working from home and unable to spend money because they are staying at home.

Chapman discussed the results of a study she conducted on the virus’s impact on the regional economy at an online conference Thursday sponsored by the Northern Virginia Chamber of Commerce.

She said that predicting what happens in this cycle is complicated by the fact the economic crisis in unprecedented because it is driven largely by a public-health crisis.

In Virginia, the numbers released by the state health department Thursday show more than 1,700 people have tested positive for coronavirus across Virginia, up from nearly 1,500 a day ago. Forty-one deaths have been reported.

The number of new cases reported has held roughly steady for the last three days in Virginia.

For most people, the new coronavirus causes mild or moderate symptoms, such as fever and cough that clear up in two to three weeks. For some, especially older adults and people with existing health problems, it can cause more severe illness, including pneumonia, and death.

The vast majority of people recover.