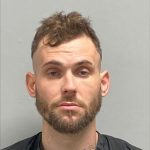 Deputies were able to make contact with Edwards, and he stated he was armed with a knife and refused to come out.  Negotiators from the Sheriff’s Office responded and made continuous attempts to contact Edwards without success.  A search warrant was obtained to enter the residence.

At approximately 11:00 pm, a tactical unit from the Sheriff’s Office made entry into the residence; after a comprehensive search of the home, it was discovered that Edwards was located in the attic.  Deputies made contact with Edwards, and he again advised he was armed with a knife and refused to come out.  At approximately 11:50 pm, deputies were able to remove Edwards from the ceiling of the home, and he was taken into custody.

In addition, he was charged with Obstruction of Justice (misdemeanor) for failing to exit the home.  He is currently held in the Henry County Adult Detention Center without bond.