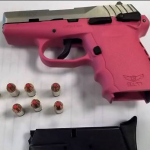 It doesn’t matter if the handgun is hot pink: it is still illegal to bring it aboard an airplane with you. The TSA says its officers found a loaded hot pink nine-millimeter handgun – with pink-tipped bullets – at Richmond International Airport. The woman who had it in her carry-on bag faces weapons charges.

From the TSA: RICHMOND – A Hopewell, Virginia, woman was arrested at Richmond International Airport on Monday,  May 7, after a Transportation Security Administration (TSA) officer found a loaded semi-automatic handgun in the traveler’s carry-on bag. The hot pink colored handgun was loaded with eight pink-tipped bullets, including one in the chamber.  A TSA officer who was staffing the checkpoint x-ray monitor detected the 9 mm firearm inside the woman’s carry-on bag as it entered the x-ray machine.  TSA officials notified the airport police, which responded to the checkpoint, confiscated the gun and arrested the woman on weapons charges. She was ticketed to fly to John F. Kennedy International Airport in New York. All guns, regardless of their color, are prohibited from being brought onto aircraft, even pink ones.

As a reminder, individuals who bring weapons to the checkpoint are subject to federal civil penalties of up to $13,000. This applies to travelers with or without concealed gun carry permits because even though an individual may have a concealed carry permit, it does not allow for a firearm to be carried onto an airplane. A typical first offense for carrying a handgun into a checkpoint is $3,900. The complete list of penalties is posted online here: https://www.tsa.gov/travel/civil-enforcement.