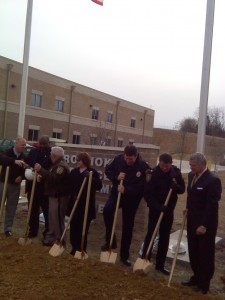 Roanoke area law enforcement officials and political leaders broke ground this afternoon on an addition to the Roanoke Police Academy off Peters Creek Road…the addition will make room for Roanoke County Police, the county sheriff’s department and Western Virginia Regional Jail. Roanoke County Police Chief Howard Hall likes the idea of working more closely with his counterparts in Roanoke City. The 83-hundred square foot addition will cost 3-million dollars…most of the funding comes from an asset forfeiture account. Hall said it should be ready by next January.

Lt. Mike Williams runs the Roanoke County Criminal Justice Academy now, which is housed in cramped quarters at the county’s public safety building. Williams said it will help build a better rapport early in the careers of law enforcement officers in both jurisdictions – which will be helpful when they have to work together.