Griffith, Riggleman say it’s time for Congress to move on from all things Trump 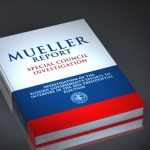 Congressman Morgan Griffith says the Mueller report finds no Trump campaign collusion with Russia — and the president’s frustration with the investigation did not stop the probe. Griffith says the issue is resolved, and it is time to close this chapter. Republican colleague Denver Riggleman agrees. He says Attorney General William Barr did the right thing in redacting not just grand jury testimony from the public report, but also data like records of telephone calls made. WFIR’s Evan Jones has more: