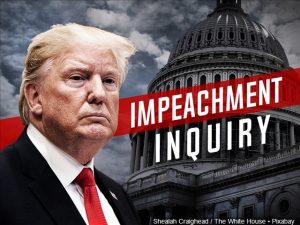 FROM CONGRESSMAN MORGAN GRIFFITH: “In my opinion after reading the transcript, all the President requested was a reset and a valid investigation into allegations to which Vice President Biden had already admitted; namely that Vice President Biden had threatened a previous Ukrainian administration with the loss of a billion dollars in aid if it did not fire the prosecutor who just happened to be investigating the company of which the Vice President’s son was a board member. As the leader of the United States, it is right and proper for President Trump to request a reexamination after a previous high-ranking government official publicly admitted to inappropriate and possibly illegal behavior.

“If the Democrats are willing to investigate the allegations regarding Mr. Biden, then my hat is off to them, but I would be surprised.

“Ultimately, this is a matter for Ukraine, but lifting the previous U.S. administration’s threats against an investigator serves the ends of justice.”

FROM CONGRESSMAN BEN CLINE: “House Speaker Nancy Pelosi has caved to those on the far-left of her party who are demanding an official impeachment inquiry. She knows there is not enough support in the full House to pass a formal resolution of impeachment, so she has thrown her support behind the embarrassing spectacle of hearings that have been going on for months in the Judiciary Committee. As a member of the Judiciary Committee, I have watched as the Democrats have failed repeatedly to build a case for impeaching the President, from hearings about nonexistent Trump-Russian collusion to the flop that was the Mueller Report. While the Speaker and her party are now focused on new rumors, phone transcripts, and third-party allegations involving the President, I remain focused on doing the job that I was elected to do by the citizens of the Sixth District. It is my hope that we can put aside these political games and work toward addressing the important issues facing the American people.”