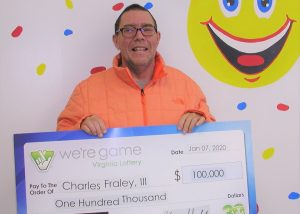 NEWS RELEASE: When Charles Fraley, III, and his wife checked the winning numbers in Virginia’s New Year’s Millionaire Raffle, the Narrows couple kept looking at one particular ticket number. It was their ticket! “We knew we had it locked up,” he said.  Mr. Fraley had just become one of five $100,000 winners in the New Year’s Day drawing. He bought his winning ticket at Gobble Stop, located at 2771 Virginia Avenue in Narrows. When asked how it felt to discover he’d won such a large lottery prize, he said he is “awestruck.”

Mr. Fraley, who is a retired circuit court clerk, said he hopes to make some home improvements with his winnings.