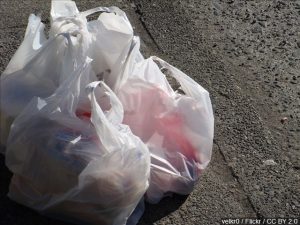 The General Assembly is now into the second half of considering new legislation, and among some of the proposals not yet receiving much public attention is one that would impact many trips you take to the supermarket or drug store. It would impose a 5-cent fee for any plastic bag you use for the first time for most grocery and drug store items. The measure has passed the House and awaits Senate action. WFIR’s Evan Jones has both sides of the debate: