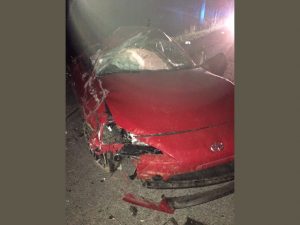 State Police say speed and alcohol were factors in an early-morning accident that injured four people in Botetourt County. It happened around 2:30 am along the 12000 block of Catawba Road. Police say the car missed a curve, ran off the roadway, struck a tree and overturned several times — and at first, all four people inside fled the scene. 21-year-old Nolasco Martinez of Roanoke is charged with DUI and other counts, and police say more charges are pending.

FROM VIRGINIA STATE POLICE: A crash occurred on Catawba Road, in the 12000 block, at 2:36 a.m. this morning.  It was a single vehicle crash involving a 2013 Toyota; there were four individuals in the vehicle and several were injured.  All four originally fled the scene on foot.  One 18 year old female returned to the scene to obtain medical attention.  A police k-9 was used to track the other occupants, which were located in another vehicle.

The 2013 Toyota was traveling south on Catawba Road, when the vehicle attempted to negotiate a left hand curve traveling too fast.  The vehicle ran off the right side of the roadway, struck a tree, overturned several times; coming to rest in the roadway.

The driver of the vehicle was identified as Nolasco D. Martinez, 21, of Roanoke, VA.  Martinez was wearing his seatbelt and was injured.  There were three passengers in the Toyota, two 18 year old females, and one 17 year old male, they all were wearing their seatbelts.  All the occupants were transported to Roanoke Memorial Hospital for injuries received in the crash.

The driver was charged with DUI and several other charges.  More charges are pending after consulting with the Botetourt County Commonwealth’s Attorney.