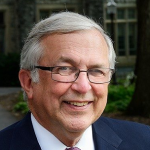 Former Virginia Tech President Charles Steger Jr. died last night at his home in Blacksburg. This morning WFIR’s Gene Marrano spoke with one of the people who worked with Steger:

From Virginia Tech: Virginia Tech President Emeritus Charles William Steger Jr., who led Virginia Tech through a period of unprecedented growth and historic transformation into one of the nation’s leading research universities, died Sunday evening, May 6, at his home in Blacksburg, Virginia. He was 70.

Serving as the university’s 15th president from 2000 to 2014, Steger was entirely committed to the institution where he received three degrees and spent nearly all of his more than 40-year professional career. He is regarded as one of Virginia Tech’s most influential presidents in its 146-year history, having led the institution amid drastic reductions in state funding for public higher education and the unimaginable tragedy of April 16, 2007.

“Charles Steger was a true visionary, a strong and resilient leader, and a deeply compassionate person who completely dedicated himself to our university,” said Virginia Tech President Tim Sands. “He achieved incredible success because he, without question, personified our motto, Ut Prosim (That I May Serve). Virginia Tech is the great institution it is today because of him. I will greatly miss him. He was a deeply valued mentor and a close personal friend.”

Others who worked closely with Steger shared their condolences.

“Virginia Tech is one of Virginia’s most venerable and respected educational institutions, and Charles Steger was a pillar of strength as president,” said former U.S. Senator John Warner (R-Va.). “Charles carefully set Virginia Tech on a course and speed that allowed the university to advance to the forefront of education while at the same time meeting the demands of a changing culture and increasingly competitive global marketplace. Education leaders worldwide can benefit from examining his model of success. Jeanne and I express our deepest sympathies to the Steger family and to the faculty, staff, students, and alumni, because no matter how big Virginia Tech grew, Charles Steger always viewed it as a family working together.”

“I’ve known Charles Steger for more than 30 years, and in that time, I always knew him not only as an advocate for Virginia Tech, but for educational opportunity for all Virginians, at every level,” said U.S. Senator Mark Warner (D-Va.). “I was proud to call him my friend, and I have incredibly fond memories of our fight together to get Tech into the ACC. I know that Dr. Steger will be missed by the whole Tech family.”

“No organization, no matter how big or small, rises above its leadership and Charles Steger was that leader who took Virginia Tech to new heights only dreamed of before,” said Virginia Tech alumnus Ben Davenport, chairman of the First Piedmont Corp. and a former two-term member of the Virginia Tech Board of Visitors who served as rector for two years during Steger’s presidency. “These accomplishments during his tenure as president were the result of his enormous capacity to orchestrate the Virginia General Assembly in such a way as to have our government move in tandem with our university vision to continuously grow and expand the mission of Virginia Tech.”

“Throughout my tenure as a colleague and friend of Dr. Charles W. Steger, I recognize him as a visionary leader who sought to positon Virginia Tech as a leading institution in a national educational landscape experiencing significant transformation,” said Minnis Ridenour, who worked alongside Steger at Virginia Tech for more than 40 years. “Charles believed in the importance of Virginia Tech and its role as a public land-grant institution. A lifetime scholar, educator, and leader, Dr. Steger ensured that Virginia Tech created an impact on a national and international level.”

“Not many of the hundreds of leaders who have led American universities in modern times have influenced their institutions as powerfully as Charles Steger influenced Virginia Tech, or as gently and wisely,” noted University of Virginia President Emeritus John T. Casteen III, whose presidential tenure coincided with Steger’s. “Charles imagined a future of service and achievement, and led Virginia Tech toward it.”

During Steger’s presidential tenure, Virginia Tech grew in enrollment from 28,000 to 31,000, increased graduate enrollment by 12 percent, raised more than $1 billion in private funding, formed a school of biomedical engineering, created a public-private school of medicine, joined the Atlantic Coast Conference (ACC), and constructed the Moss Arts Center and the Virginia Tech Research Center — Arlington as part of the largest building boom in university history.

Steger’s ground-breaking partnership with Carilion Clinic led to the creation of the Virginia Tech Carilion School of Medicine and Research Institute, forming the fifth medical school in Virginia. The medical school, which graduated its first class in 2014, will fully integrate into Virginia Tech and become its ninth college on July 1.

A hallmark of his administration was the realization of a 50-year dream for Hokie fans—entry into the Atlantic Coast Conference (ACC) in 2004. The university’s football program, led by Steger’s undergraduate Class of 1969 classmate Frank Beamer, won four conference titles in the first eight years of ACC play.

With significant personal resolve, Steger led the university through its darkest days following the tragedy on April 16, 2007. Although the campus community suffered a tremendous collective trauma following the loss of 32 faculty members and students whose lives were taken, Steger’s steady hand of leadership inspired the university community to come together and recover, and the university became a model for organizational resilience.

The university built 40 major buildings under Steger, adding more space during his tenure than that of any other president in the university’s history. Steger championed the arts while investing in the liberal arts and arts programming. In 2006, University Distinguished Professor Nikki Giovanni established the Steger Poetry Prize, a competition for Virginia Tech undergraduate students, and named it for its first benefactor. And Steger was the driving force behind the Moss Arts Center, which opened in 2013.

Among the 40 buildings, two separately constructed parts of the facility that collectively house the Biocomplexity Institute of Virginia Tech today were named Steger Hall in 2016.

Steger elevated the university’s presence in northern Virginia by establishing the university’s National Capital Region operations and building a state-of-the-art office and research facility in Arlington that opened in 2011. The strategic move signaled the university’s growing commitment to the region, which continues to this day.

As dean of the College of Architecture and Urban Studies from 1981 to 1993, a post he assumed at the age of 33, Steger pushed the university to establish its first overseas campus, in Riva San Vitale, Switzerland. In recognition of his essential role in its creation, the facility was named the Steger Center for International Scholarship in 2014.

A Fellow in the American Institute of Architects, Steger earned three Virginia Tech degrees: a bachelor’s degree in 1970 and a master’s degree in 1971, both in architecture; and a Ph.D. in environmental sciences and engineering in 1978. He left a private-sector career in 1976 to pursue his passion for teaching at Virginia Tech.

In addition to serving as a faculty member and a college dean, Steger also served as acting vice president for public service, and then vice president for development and university relations, before becoming president in 2000. He was a member of Virginia Tech’s Ut Prosim Society and Legacy Society.

Following his retirement as president in 2014, Steger served as executive director of the Global Forum on Urban and Regional Resilience, which brings university researchers and partner organizations together to facilitate conversations about patterns and processes of urbanization and regional development, with a special emphasis on the long-term resilience of places and communities.

Steger was named a 2013 Tech Titan by The Washingtonian magazine. He received the Michael P. Malone International Leadership Award from the Association of Public and Land-Grant Universities in 2010, and the Chief Executive Leadership Award from the Council for Advancement and Support of Education, District III, in 2009. The New Century Technology Council awarded him its 2004 Compass Award for visionary thinking and leadership in the field of information technology.

Condolences may be shared by emailing vtnews@vt.edu.