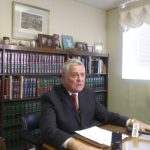 Former Roanoke Mayor David Bowers said today if Roanoke City leaders want to change the date of local elections, they should be held in November of odd-numbered years. Bowers says state and local issues are often intertwined and it makes sense to have local elections on the same dates as state contests. Bowers introduced what he called a “Virginia Plan” to make that happen by November 2023. Right now, Roanoke City voters elect their leaders in the spring of even-numbered years, when turnout is usually very low. What Bowers did NOT do today was announce another run for City Council – he said it was too early to make that decision.