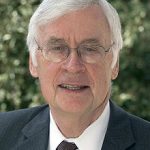 Former Governor Gerald Baliles, 79, passed away early this morning according to a memo from Governor Northam’s office. Baliles was surrounded by his family. Funeral arrangements are incomplete. Baliles was the Democratic Governor of Virginia from 1986 to 1990. He was also a former director of the Miller Center of Public Affairs at the University of Virginia. Said Northam: “As the 65th Governor of Virginia, he understood and valued the role government can play in improving citizens’ lives. He transformed Virginia’s transportation infrastructure, signed Virginia into the Chesapeake Bay agreement under which we still operate today, and focused on expanding access to higher education, among many other accomplishments. Governor Baliles fought for rural Virginians, promoted civil discourse, and was the epitome of a true public servant.”