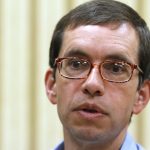 Another call has been sounded for Jens Soering  to be pardoned. The son of a German diplomat was sentenced to life in prison without parole for murdering his girlfriend’s parents in Bedford County in 1985. He first confessed but later said he didn’t do it. Stan Lapekas is a retired FBI agent who says he learned through federal documents that the bureau had been contacted years ago to provide a psychological profile in the case:

Lapekas becomes the fourth veteran law enforcement officer who says Soering should be pardoned. He spoke Monday at a news conference in Charlottesville. Bedford County Sheriff Mike Brown says he remains steadfast in his belief in the integrity of the investigation, prosecution and conviction of Jens Soering.