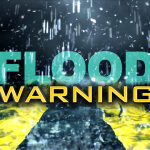 The National Weather Service predicts the Roanoke River will crest later today before causing major flooding. The forecast calls for a crest this evening about 1 1/2 feet above flood stage, and that is considered in the minor flooding range. But Roanoke City officials aren’t taking any chances, and they say anyone living in low-lying areas shouldn’t either. More from WFIR’s Evan Jones: