Update on fire near Tanglewood Mall this morning 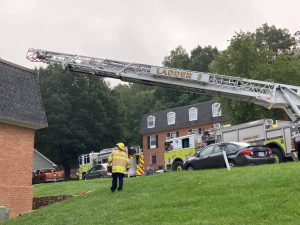 (Update 12:15pm) The Roanoke County Fire Marshal’s Office has concluded that the structure fire on Electric Road this morning was accidental in nature, with the cause due to a mechanical/maintenance issue with the AC/Heat pump furnace.  Estimated damages $15,000

A fire this morning at the Copper Croft apartments across from Tanglewood Mall. Roanoke County Fire and Rescue got the call just before 8:00. They found smoke coming from a second floor apartment and brought the fire under control in about 30 minutes. Two adults and a child were evacuated safely and were displaced. One person was treated for smoke inhalation at the scene.

NEWS RELEASE: Roanoke County Fire and Rescue responded at about 7:50 a.m., on Wednesday, September 16, 2020 to the 4300 block of Electric Road, which is located in the Cave Spring area, for the report of a commercial structure fire at Copper Croft Apartments.  First arriving crews from Station 3 (Cave Spring) found light smoke showing from the inside of a second-floor apartment. The fire was brought under control in about thirty minutes.One subject was treated on scene for smoke inhalation but refused transport to a local hospital. The apartment was occupied by two adults and one child who all evacuated safely. They will be displaced and assisted by Copper Croft management. No other apartments were displaced. The Roanoke County Fire Marshal’s Office is on scene to investigate a cause and estimate damages.