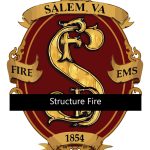 The Salem Fire & EMS Department responded to a commercial structure fire at 17 7th St. early this
morning at approximately 2:30 a.m. One large commercial property, the former home of McClung
Lumber Company, was destroyed, and one adjacent building sustained minor damage. No one was in
either building at the time of the fire and there were no injuries as a result of the fire.

The first units arrived within seven minutes of receiving the call and found the main structure fully
engulfed in flames with fire spreading to the building next door. The Incident Commander immediately
requested assistance from the Roanoke Fire & EMS Department and firefighters began an exterior attack
on both buildings. Fire crews were able to extinguish the fire in the adjacent building quickly and limit any damage to the building and its contents. It took approximately one hour to bring the entire fire under control, and crews remained on the scene for several hours performing an extensive overhaul of the site.