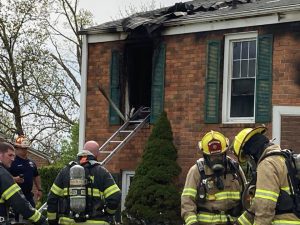 Fire heavily damaged a home this afternoon in western Roanoke County, displacing two residents and their dog. Firefighters arrived at the Creekwood Drive home in the Fort Lewis area to find heavy fire and smoke showing. Everyone got out safely. There is no immediate word on a cause or damage estimate.

NEWS RELEASE: Roanoke County Fire and Rescue responded at about 2:40p.m., on Tuesday, April 13, 2021 to the 3000 block of Creekwood Drive, in the Fort Lewis area for the report of a residential structure fire. First arriving crews from Station 9 (Fort Lewis) found heavy fire and smoke showing from a second story window of a two-story house. The home was occupied by two adults and a dog at the time of the fire. The occupants and the dog were able to evacuate without injury. The fire was knocked down in about twenty minutes after the arrival of the first units. Three adult occupants will be displaced and are be assisting by the American Red Cross. We appreciate the help of Salem Fire and EMS on this call. The Roanoke County Fire Marshal’s Office is investigating and will provide a damage estimate.