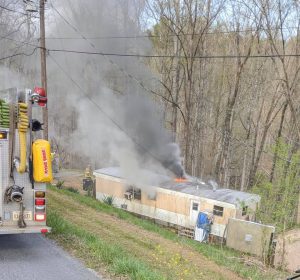 NEWS RELEASE: Roanoke County, April 5, 2020) Roanoke County Fire and Rescue responded at about 5:20 p.m., on Sunday, April 5, 2020 to the 4500 block of Brookridge Road, which is located in the Mount Pleasant area, for the report of a residential structure fire. First arriving crews from Station 6 (Mount Pleasant) and City of Roanoke Station 11 found heavy smoke and flames coming from the rear of a single-wide mobile home. A single male occupant of the trailer was able to escape unharmed. There were no injuries. The fire was marked under control in about 20 minutes. The American Red Cross will be assisting the occupant who is displaced. The Roanoke County Fire Marshal’s Office has ruled that the fire was accidental. The fire did significant damage to the home. Damages are estimated at $5,000.