Family of four and three kittens safe after house fire 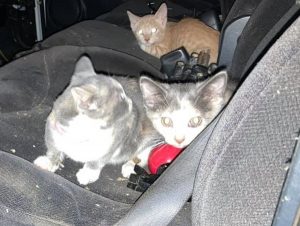 UPDATE from Roanoke County Fire and Rescue: The cause of the structure fire is undetermined. The fire originated in the space above the ceiling and the structure is a total loss with a damage estimate of $65,000. Two adults and two young children were home at the time the fire was discovered and are displaced. There were several cats rescued; however, there are some still missing.

PREVIOUS: Roanoke County Fire and Rescue responded at about 12:10 a.m., on Wednesday, September 9, 2020 to the 5500 block of Indian Grave Road, which is located in the Clearbrook area, for the report of a residential structure fire. First arriving crews from Station 7 (Clearbrook)found heavy fire and smoke showing from the roof of the single story, wood frame structure. The fire was brought under control in about three hours.The home was occupied by two adults and two children who all evacuated safely. They will be displaced and staying with family in the area.The American Red Cross is assisting the family. Three kittens were rescued from the home. The home is estimated to be a total loss. The Roanoke County Fire Marshal’s Office is on scene to investigate a cause and estimate damages.