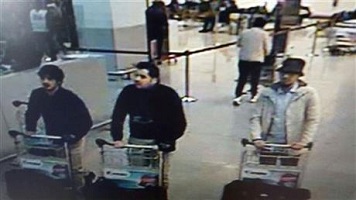 Two on the left are believed to be Brussels suicide bombers, the man on the right is still being sought by the police. Photo from AP.

Belgian authorities were searching Wednesday for a top suspect in the country’s deadliest attacks in decades, as the European Union’s capital awoke under guard and with limited public transport after 34 were killed in bombings on the Brussels airport and a subway station. Police conducted raids into the night and circulated a photo of three men seen in the airport suspected of involvement in Tuesday’s attacks. Belgian state broadcaster RTBF has identified two of the attackers as brothers Khalid and Brahim Bakraoui. They are believed to have blown themselves up in the attacks. The third man is at large and has not been identified. The report Wednesday says the brothers were known to police for past crimes, but nothing relating to terrorism. RTBF says Khalid Bakraoui had rented an apartment which was raided by police last week in an operation that led authorities to top Paris attacks suspect Salah Abdeslam.

The Islamic State group has issued an updated communique taking credit for the Brussels attacks and threatening other countries taking part in the anti-IS coalition. The statement promises “dark days” for countries allied against the Islamic State, threatening that “what is coming is worse and more bitter.” The communique was published in Arabic and French, and an English translation was provided by the SITE Intelligence Group, which monitors jihadi websites. IS also released photos purportedly showing its fighters in Syria giving out candy to children to celebrate the Brussels attacks, according to SITE.

A Belgian security official says the death toll has risen to 34 in attacks on the Brussels airport and a subway station. The official did not specify how many people were killed and wounded at each site. The official spoke on condition of anonymity because precise numbers were expected to be announced early Wednesday. Earlier, the government had reported 20 dead at the Maelbeek metro station, in the heart of the European Union’s capital, and 11 dead at the airport, and scores of injured. The Islamic State group claimed responsibility for the attacks.