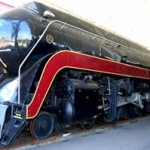 The return of the Norfolk and Western Class J 611 steam passenger locomotive to the rails this summer had an estimated $4.5 to $7 million economic impact in the Virginia communities she visited. The Virginia Museum of Transportation says excursion passengers in Roanoke alone accounted for an estimated $549,000 of outside money spend in Roanoke in 2015.  According to the Museum, 80,000 people lined the route from Spencer, North Carolina to Roanoke and another 10,000 were waiting in downtown Roanoke to welcome home the 611 on May 30, 2015.  For more information about the 611 click here.