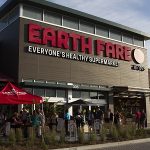 The Earth Fare organic and natural foods-only grocery store chain went bankrupt earlier this year – but a new investment group purchased the name and 8 locations. The Roanoke Earth Fare on Franklin Road was one of them – and on Monday at 8am they will open the doors again. David Issinghood is Earth Fare’s chief operating officer; he calls Monday’s 8am Earth Fare re-boot in Roanoke a “soft opening,” hoping to avoid a crush of people with social distancing in mind.