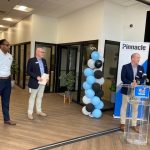 The Drumstick Dash 5K on Thanksgiving morning that benefits the Rescue Mission of Roanoke will be back downtown this year. The revised course will start and end at Elmwood Park and will include fewer turns. Registration is open now for the Drumstick Dash; Pinnacle Bank was announced this morning as the new title sponsor.  It was moved to the greenway three days before the race last November due to a lack of police personnel to work traffic at busy intersections. Chief Sam Roman says they’ve been addressing that issue since.