Drought Watch notwithstanding, area reservoir levels are above normal 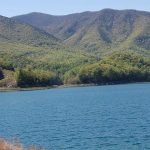 The state may have issued a “Drought Watch Advisory” for the Roanoke River, but for now, at least, local reservoir levels remain higher than normal for this time of year. Carvins and Cove and Spring Hollow reservoirs are both holding more than 85 per cent of their capacities right now — both a little higher than normal for October. Still, the Western Virginia Water Authority says it has indeed been dry in recent months, and the state advisory makes sense. More from WFIR’s Evan Jones.