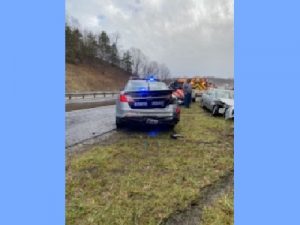 NEWS RELEASE: Two Virginia State Police troopers are recovering from minor injuries after their patrol vehicle was struck on Interstate 81 in Wythe County Monday morning (Dec. 14). Motorists are reminded no matter where they’re traveling in Virginia today, to please be mindful of and drive for the wet, slick conditions. Drivers are also reminded of Virginia’s Move Over law, which requires all vehicles to move over a lane or pass cautiously any vehicle equipped with flashing red, blue or amber lights and is stopped on the side of a road.

At 7:40 a.m. Monday (Dec. 14), Virginia State Police Trooper J.G. Carico and Trooper K.D. Nelson responded to a single-vehicle crash (no injury reported) that had occurred when a vehicle traveling north on I-81 ran off the right side of the interstate at the 68 mile marker. Both troopers were seated in their marked Virginia State Police Ford Taurus finishing up on the crash investigation when a 2005 Toyota Camry traveling north on I-81 ran off the road and struck the rear of their vehicle. The state police vehicle was parked on the right shoulder and had its emergency lights activated at the time of the crash.
The two troopers were transported to Wythe County Community Hospital to be checked out for minor injuries.
The driver of the Camry, William A. Porter, 25, of Rural Retreat, Va., was charged with reckless driving for failure to maintain control of his vehicle and was cited for a defective equipment violation. Porter was not injured in the crash.