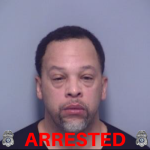 (from Roanoke PD) On January 7, 2022 at approximately 1:40 a.m., the City of Roanoke E-911 Center advised officers of a person with a gunshot wound in the 3800 block of Williamson Road NW. Responding officers located an adult male inside of a business in the area with what appeared to be a critical gunshot wound. Roanoke Fire-EMS transported the man to Carilion Roanoke Memorial Hospital for treatment. Throughout the course of the investigation, Officers on scene determined that Jeffrey E. White, 52 of Roanoke, was the suspect in the shooting. Witnesses advised that Mr. White and another patron of the business became involved in a physical altercation before Mr. White left the business. Mr. White was confronted by the victim of this incident outside of the business, which is when the shooting occurred. Mr. White then fled the scene on foot. Officers did not immediately locate Mr. White after the incident occurred.

Patrol Officers working with regional task force investigators relentlessly sought Mr. White, who was ultimately located in the City of Roanoke earlier this morning. Mr. White was taken into custody without incident and charged with malicious wounding, use of a firearm in commission of a felony, and possession of a firearm by a convicted felon.