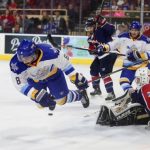 A gesture made by Roanoke Rail Yard Dawgs forward Jesse Schwartz described as being “racially inappropriate” that was directed towards Al Graves – a black player on the Quad City Storm – means Schwartz has been now suspended by the team and the SPHL for the rest of the season and any playoff run. A league statement says while Schwartz has apologized, “the SPHL will not tolerate incidents of this nature.” The gesture led to an on-ice fight towards the end of the Saturday night game in Moline, Illinois. Dawgs head coach Dan Bremner:

Hear our complete and latest update from head coach Dan Bremner – starting with the Schwartz suspension – below: