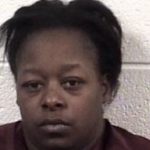 WENTWORTH, N.C. (AP) — A Virginia woman accused of fatally injuring her 3-month-old son has been charged with murder and child abuse, according to authorities in North Carolina.

The Rockingham County Sheriff’s Office alleged Shantiequa Renea Woods, of Danville, Virginia, fatally injured her son while he was staying with her near Ruffin, North Carolina, last week.

The agency wrote in a statement that the child, Isaiah Woods, had suffered blunt force trauma to his head and torso. The baby was taken to a hospital Thursday night where he was pronounced dead.

Authorities were continuing to investigate.