Cruz says Youngkin is the Republican who can beat McAuliffe 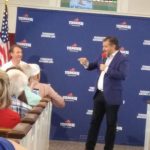 More than 300 people crowded into CommUnity Church in Salem this afternoon as Republican candidate for Governor Glenn Youngkin made a campaign stop. Youngkin said he has the momentum ahead of Saturday’s GOP convention and pointed to several surveys that show him leading the field. With him was Texas Senator Ted Cruz, who endorsed Youngkin yesterday and calls the conservative businessman a friend. Cruz told those assembled that the signs are right for a Republican surge at the polls – and that Youngkin can beat Democrat Terry McAuliffe in November: