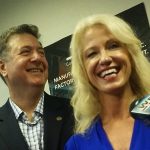 A high-profile member of President Trump’s was in Roanoke County this morning to promote the president’s tax  reform proposal. White House Counselor Kellyanne Conway says Trump prefers to call it a “tax cut” proposal, since “reform” is a word that, in her words, many people associate with the Washington Swamp. But she says the plan is also about simplifying the current tax code – and stripping away burdensome regulations.  Conway attended an event at Optical Cable Corporation that included representatives from state and national manufacturing associations. Former Governor and US Senator George Allen was also present at the town hall style event.