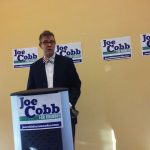 Roanoke City Council candidate Joe Cobb was at a bus stop in northwest Roanoke today – rolling out a campaign plank regarding public transit and the Valley Metro bus system. Cobb called it “3 More Hours” and posted his message on Facebook.  Cobb – running as a Democrat – said some without their own vehicle are having to pay more for other means of transportation to get to work, because Valley Metro buses do not run late enough.