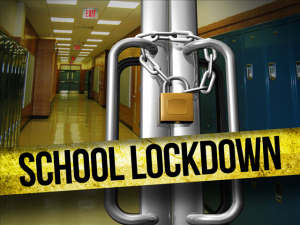 Roanoke County school officials say this morning’s lockdown at the Burton Center for Arts and Technology was initiated when large stage flats that were being moved got caught in wind gusts and slammed to the ground. That made a loud, sharp sound that someone thought sounded like gunfire. Police were called, and lockdown procedures were put into place. The all-clear was sounded about an hour later.

From Roanoke County Schools: Earlier this morning, some students were moving some large wooden theater structures outside that got caught by a breeze and fell to the ground, creating some loud, sharp sounds that were similar to the sound of gunfire. Upon hearing the sounds, a student called 911 to report the sounds. Immediately, as a precaution, the school went on lockdown and the Salem and Roanoke County police responded. During their response, the Salem Police Department evacuated some students to the Salem Civic Center as a further precautionary measure. The lockdown lasted about a little over an hour and then students returned to class to resume the day. At no point were any students or staff in danger.

PREVIOUS: The Burton Center for Arts & Technology was placed on lockdown this morning due to a report of a sound “similar to gunfire”. A Roanoke County Schools spokesman says this is just a precaution. Salem and Roanoke County police have responded. Officials say all students and staff are safe, and parents are asked not to come to the Burton campus.