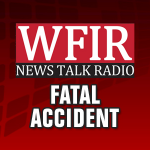 State Police say a Buena Vista woman was killed yesterday when her car left US 501 in the Glasgow area of Rockbridge County, struck an embankment and overturned.  Troopers say 29-year-old Adrianna Milligan was not wearing her seatbelt. She died at the scene.

News release: Virginia State Police Trooper S.R. Stagner is investigating a single vehicle crash which resulted in a fatality.  The crash occurred Monday (Apr 1) at 3:14 p.m. on Route 501, one mile north of Route 130 in Rockbridge County. A 2009 Nissan Maxima was traveling on Route 501 when the vehicle ran off the right side of the roadway, struck the embankment and overturned. The driver of the Nissan was identified as Adrianna Emily Milligan, 29, of Buena Vista, Va.  Ms. Milligan was not wearing her seatbelt and died at the scene. The crash remains under investigation.