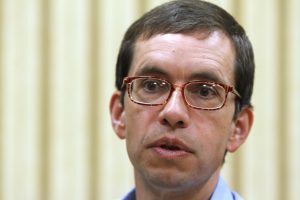 Convicted killers Jens Soering and Elizabeth Haysom were granted parole today.  Both were convicted for the 1985 slayings of Haysom’s parents in their Bedford County home in a case that received international attention at the time — and to some extent, still does. Soering was the son of a German diplomat; the murders were gruesome by almost any definition, with both victims stabbed multiple times and their throats slashed. Haysom pleaded guilty as an accessory to the killings and testified in Soering’s trial.

Both were convicted before parole was abolished in Virginia, and both have made multiple earlier requests to be released; today was the first time those requests were granted.

Soering will be released to immigration officials for deportation to Germany; Haysom will return to her home country of Canada.

Soering has maintained for decades that he was innocent despite signing a confession early in the investigation. TheVirginia State Parole Board, which looks into such requests, turned that down, but a spokesperson tells the Times-Dispatch that parole and deportation are appropriate given “their youth at the time of the offenses, their institutional adjustment and the length of their incarceration.”

Soering was 18 years old at the time of the murders, and Haysom was 20.

FALLS CHURCH, Va. (AP) — Virginia granted parole on Monday to a German diplomat’s son who was serving a life sentence for the 1985 killings of his girlfriend’s parents.

Virginia Gov. Ralph Northam’s office said the state parole board granted Jens Soering parole for the murders of Nancy and Derek Haysom. The board had rejected his 14 previous parole requests.

Soering’s lawyer, Steven Rosenfield, said he had not received notice of the parole board’s decision and declined further comment. In previous parole applications, Rosenfield said his client had been a model prisoner and planned to live in Germany if paroled.

Soering initially confessed to the killings but later recanted, saying he was covering for girlfriend, Elizabeth Haysom. She also was granted parole Monday.

Northam’s office says both Soering and Haysom will be deported and unable to return to the U.S.

Northam “respects the Parole Board’s expertise and appreciates their work on this and all other cases,” the governor’s office said in a statement.

Virginia abolished parole in 1995, but those who were convicted before then are still eligible to seek parole.

In his pardon applications, Soering and his lawyers said DNA evidence unavailable at the time of his conviction pointed to his innocence. The DNA analyses showed that some of the Type O blood found at the scene did not belong to Soering. Nor could it have belonged to Elizabeth Haysom, who has Type B blood.

In 2010, as he was leaving office, then-Gov. Tim Kaine submitted a plan to the Justice department that would have allowed Soering to serve the remainder of his sentence in Germany. Under the plan, Soering would have been eligible for release in Germany after two years there.

The parole board most recently denied Soering’s parole request in January. At the time, it cited the seriousness of his crime and said “Release at this time would diminish seriousness of crime,” according to board documents.