Habeeb is retiring from House of Delegates 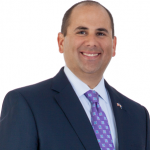 Delegate Greg Habeeb has informed Republican party leaders he is retiring from elected office at the end of August. House Speaker Kirk Cox says he will call for a special election to choose a successor. The date is not yet selected. Here is his statement:

I am humbled and honored that you have given me the honor of being your voice in Richmond for eight years. It has been my honor to serve you, but I passionately believe in our Founders’ vision of a citizen legislature where regular people step up, take their turn at bat, and then stepped aside to let the next person step forward. With that philosophy in mind, it is time for me to step aside and let a new person, with new passions and new ideas, step forward to serve our community.

Throughout my time in the House of Delegates, my amazing wife and kids, along with my law partners and co-workers at Gentry Locke, have sacrificed to let me serve. They never complained when I missed a family meal or a kid’s basketball game. They never complained when they had to cover a deposition or hearing because I was stuck in Richmond. It’s time for me to pay them back by returning to being a full-time Dad and a full-time law partner at Gentry Locke.

Over the last few years, I’ve begun to take on a more significant role at Gentry Locke, culminating with my becoming an owner this year. Looking forward, there are some very exciting professional opportunities for my firm and me on the horizon. Those new responsibilities, along with the ever-growing responsibilities of being a Dad to my amazing kids and a husband to my incredible wife, make now the right time for me to step away. There is no such thing as the perfect time to leave an institution as remarkable as the Virginia House of Delegates, but there is a right time. For me, that time is now.

Thank you for all your support and prayers through the years. You’ll never know how much it meant to Christy, the kids, and me. I would also be remiss if I didn’t say a special thank you to all the amazing folks I was privileged to serve with in Richmond. Regardless of where you’re from, what you believe or to which party you belong, you all have my upmost respect for stepping into the arena and being willing to serve. You are all my heroes. Keep fighting for what you believe in. To my colleagues from the Roanoke and New River Valleys, thank you for your amazing leadership and for standing beside me in this journey.

Thank you, and may God bless you and your families.

From House of Delegates Speaker Kirk Cox: “Since his election in 2011, Greg has been a valuable member of the House of Delegates. He contributed on the floor, as the Chairman of the Civil Subcommittee and as a member of Commerce & Labor, Transportation and Rules committees during his time in the House. “While we are disappointed by his announcement, I respect the personal decision he made. Greg has committed to working alongside us to identify strong candidates who will be ready to fill his shoes. We are confident that Greg will be succeeded by a Republican who shares our commitment to conservative governing principles. With the House of Delegates currently in session, the power to call a special election rests with me as Speaker. I will be reviewing potential dates and making an announcement in the near future.”