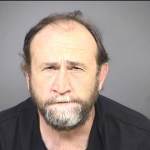 A Botetourt County man is charged with threatening sheriff’s deputies with a firearm and a crossbow in a standoff today that lasted about two hours. Officials say it started with a domestic disturbance call around seven a.m. and ended when 55-year-old John McCarty walked out of the Fincastle-area home around 9:15. Nobody was hurt.

NEWS RELEASE: On 07/02/19, at 6:56 am Botetourt County Sheriff’s Office Deputies responded to Big Springs Road in Fincastle for a domestic situation where dispatch had received a 911 call that was disconnected while they attempted to get information on situation. Upon the first Deputies arrival they were met outside the residence by an agitated male subject later identified as John A McCarty Sr. age 55 of Fincastle. The subject retreated inside the home, came back out with appeared to be a firearm, and demanded the Deputies to leave his property. The Deputies on scene asked for additional units to respond as other units arrived the subject came in and out of the home using a parked vehicle as cover, at one point subject retrieved a cross bow and took it back into the home. Around 7:30 am, the subject went into the home and refused to come out. While the subject was inside the home, Deputies observed him through a window holding what appeared to be a firearm and he made threats to shoot Deputies on the scene. The subject also loaded the crossbow and placed it in window. Deputies took a position of cover and began negotiating with subject to come out. Deputies on scene along with Deputies from dispatch center (where the subject would call into demanding the Deputies to leave and asked Federal agent to respond to his location) negotiated with subject. At 9:15 am, the subject came out of residence and was placed in custody without further incident. After subject was placed in custody, Deputies recovered the weapon, which was a 22caliber air rifle and the crossbow.  McCarty was transported to the Botetourt Craig County regional jail where he is being held for brandishing a firearm and willfully or maliciously prevent or obstructing one from summoning law enforcement. He is being held at this time without bond.