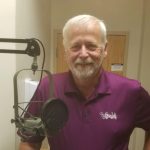 A third candidate has entered the race to represent Cave Spring on the Roanoke County Board of Supervisors. Stan Seymour joins Republican Paul Mahoney, and Democrat Brian Powell in vying for the seat. Seymour owns local Bojangle’s franchises. He’s now involved in a zoning dispute with his residential neighbor – the Wildlife Center of Southwest Virginia – and with Roanoke County. Seymour, who will run as an independent in November, says he wants to be an advocate for responsive and transparent local government.  He also ran as an independent unsuccessfully 8 years ago.