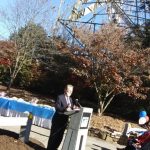 The Blue Star program honors all those who have served their country in the U.S. military. On this Veteran’s day morning near the Mill Mountain Star, a Blue Star Memorial marker was unveiled after short speeches and patriotic chorus music conducted by the RSO’s David Stuart Wiley.  A local group – the Westchester Garden Club – worked with Roanoke Parks and Recreation on bringing a Blue Star Memorial marker to Mill Mountain. There are more than 3200 in all 50 states. City councilman Bill Bestpitch – a staff sergeant at the end of his 8-year Army stint – was a speaker: