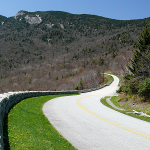 A stretch of the Blue Ridge Parkway that’s been closed from Explore Park to milepost 121 – Adney Gap – after a slope failure following heavy May rain will now be repaired and then reopened. The National Park Service says it should take ten days and be completed before the peak of the Fall leaf season – expected late next month. However the Parkway from  121 to Adney Gap milepost 136 is closed for a full road failure and will take 12 to 18 months to repair. (see full release below)

Roanoke, VA – National Park Service (NPS) officials announced that work began today, to mitigate a slope failure that resulted in the closure of the Blue Ridge Parkway from the Explore Park entrance (milepost 115.5) to U.S. 220 (milepost 121.4). The work, which will be completed under a full parkway closure, is expected to take about 10 days, and will allow for the section of parkway from U.S. 24 to U.S. 220 to reopen for the busy fall season. The road will remain closed to all uses south of U.S. 220 (milepost 121.4) to Adney Gap (milepost 135.9).

On May 22, 2020, NPS officials announced heavy rain created multiple road hazards in the Roanoke, Virginia, area of the Parkway that required a road closure from milepost 112.4 to milepost 135.9, from U.S. Route 24 to Adney Gap. The section from Milepost 112.4 to 115.5, at the Explore Park entrance, opened earlier this summer and remains open.  The largest hazard is a full road failure roughly one hundred and fifty feet (150′) in length near milepost 128. This complex road failure will require a closure of at least 12 to 18 months. Visitors are reminded that, due to the hazardous nature of this slope failure, the section of parkway from U.S. 220 (milepost 121.4) to Adney Gap (milepost 135.9) is closed to all uses including motor vehicles, bicycles and pedestrians.

Updates to the road status will be made when available on the park website at www.nps.gov/blri, via press release and on social media at www.facebook.com/blueridgenps.