Blaze destroys Roanoke County home; no ruling yet on the cause 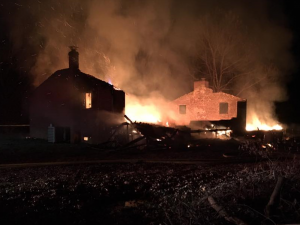 There is no ruling released yet on what may have caused an overnight house fire in the Mount Pleasant area of Roanoke County. The home along the 3900 block of Whispering Lane is a total loss. Neighbors told fire crews the home has been vacant for months and had been undergoing renovations. There are no injuries reported.

News release: Roanoke County Fire and Rescue responded at 2:00 a.m., on Monday, November 26, 2018 to the 3900 block of Whispering Lane, in the Mount Pleasant area of Roanoke County for the report of a residential structure fire. First arriving crews from Mount Pleasant found a two-story, brick home completely involved in fire. The home has been vacant for months according to the neighbors. It appears that renovations were in progress on this home. There are no injuries. The home is a total loss and the roof has collapsed. This is a very rural area of Roanoke County and fire hydrants are not present in the area, causing fire crews to relay water using tanker trucks. Crews from Mount Pleasant, Vinton, Cave Spring, the City of Roanoke and North County responded to the fire. The Roanoke County Fire Marshal’s Office is on scene to investigate a cause.