A senior from Blacksburg High School won the top prize in Saturday’s After Prom Grand Finale in downtown Roanoke.  Audrey Polk, who will attend Virginia Commonwealth University in the fall, got behind the wheel of a Nissan Juke, donated by First Team Auto Mall. 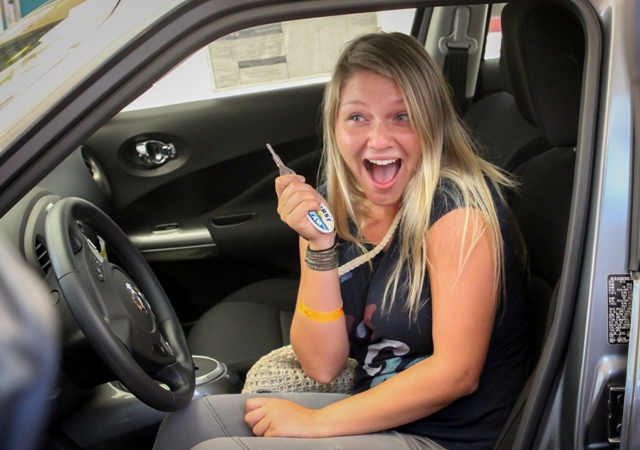 Audrey Polk is the new owner of Nissan Juke donated by First Team.

Roanoke, VA (June 1, 2013) – Students from 28 area high schools gathered in downtown Roanoke, to try to win a new car, but it was Audrey Polk, a senior from Blacksburg High School, who won it.

“I can’t believe it.  I’m so excited.  My car is all worn out,” Polk said moments after the key she had drawn successfully unlocked the car, making her the winner.   Moments later she called her mother in Blacksburg, who didn’t believe her daughter had won.  “No Mom, I REALLY won!” said the excited Polk, who will attend Virginia Commonwealth University in the fall to major in Media Studies.

Polk was among students who won a chance at the car by attending after prom parties designed to keep high school students safe on prom night.  In order to be eligible, students were required to stay at after prom parties until the events concluded.   Four students from each school were selected to attend the After Prom Grand Finale, which was held in Roanoke’s Century Plaza.

”The car is the incentive,” said Kathy Graham Sullivan, director of Roanoke Area Youth Substance Abuse Coalition or RAYSAC.   “When the kids think they might win a new car, they tend to stay at after prom parties where they are safe.”  Sullivan pointed out that since the programs’ inception 25 years ago not a single student had been injured or killed in a vehicular accident at a school participating in the car giveaway program.  Sullivan thanked First Team Auto Mall of Roanoke, which has donated the car for the last 23 years.

“We think it’s important to keep these kids safe on prom night,” said First Team President and General Manager David Dillon, who was on hand for the giveaway.  “If we can keep kids safe at area high schools by making a car available, we think it’s worth the investment in our communities.”