Another loaded gun confiscated at airport 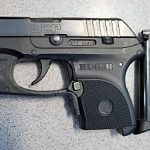 A West Virginia woman was stopped by the Transportation Security Administration with a loaded handgun at Roanoke-Blacksburg Regional Airport yesterday. A TSA officer at the x-ray monitor detected the .38 caliber handgun inside a carry-on bag. The gun was loaded with six bullets. Airport police responded, confiscated the handgun and cited the woman on a weapons charge. It marks the second gun that TSA officers have detected there so far this year. In 2017, three guns were caught at the checkpoint. Individuals who bring firearms to the checkpoint are subject to federal civil penalties of up to $13,000