Another gun found at ROA airport 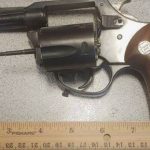 The fifth gun found at Roanoke-Blacksburg Regional Airport this year was owned by a Californian trying to bring a loaded 38 caliber revolver through the checkpoint this morning. TSA officials spotted the gun on an X-Ray monitor and notified airport police – who then cited the man on a weapons charge. In 2018 six guns in all were confiscated at ROA baggage checkpoints. The TSA says nationwide last year, 4,239 firearms were discovered in carry-on bags at checkpoints across the country, averaging about 11.6 firearms per day.