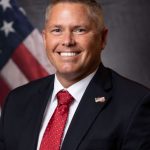 The City of Salem’s police officer of the year in 2012 has announced that he intends to run for the Botetourt County’s sheriff’s position that is open this fall with the retirement of Ronnie Sprinkle.  Danny Crouse is a Botetourt County resident and is now a Lt. in Salem’s Detective division. Crouse is not one of the three Republicans who are running in a primary next Tuesday for the Sheriff’s position.