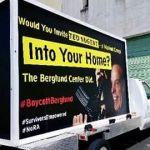 UPDATE: In response to Andy Parker’s rolling billboard protest of the upcoming Ted Nugent concert over his pro-gun stance, the Berglund Center released a statement yesterday, saying “we are a public assembly facility and must obey the law, which includes non-discrimination against anyone or any artist based on their political views. Ted Nugent wanted to perform in Roanoke and we could not turn away his business simply because not everyone shares his values.”

PREVIOUS: Fans of Ted Nugent – the “Motor City Madman” – can go see him rock-and-roll on July 17th at the Berglund Center. Others are just “mad” about that concert booking, as WFIR’s Gene Marrano reports: